In the context of financial markets, liquidity refers to how quickly an asset can be traded without causing major changes in its price. The more players there are in the market, the higher the demand and supply on a traded asset, and the lower is the spread between the highest demand price and the lowest supply price. In the Forex market, daily turnover reaches several trillion dollars. To function properly, such a huge market requires tons of liquidity. The Forex market brings together traders with different financial possibilities that form a vertical hierarchy. The top-level of this ladder is occupied by high-profile banks, such as Deutsche Bank, Barclays Capital, Morgan Stanley, and a few others.

It’s the major banks that establish the exchange rates. However, the volumes of bank transactions are so large that common traders simply don’t have the capital to take part in such transactions as standalone agents. This is where liquidity providers come in. These are the companies that act as intermediaries between banks and other market players. Suppliers give common traders access to the interbank market. The biggest liquidity providers include Currenex, Integral, KCG Hotspot, CFH Clearing, and LMAX Exchange.

In a fast-moving market, this operation scheme often comes with slippage and delays in order execution. If you’re using news trading, this can be a major problem. Most suppliers operate as a part of ECN. Currenex is considered the biggest ECN supplier nowadays.

Unlike ECN, MTF protects traders from slippage. Once the system finds the matching price from a liquidity provider, it executes a client order automatically. The biggest drawback of MTFs is a higher spread. The two top MTFs are LMAX and CFH Clearing.

Client limit orders are brought together via a FIX (Financial Information Exchange) protocol. FIX implies two types of order execution, FOK and IOC. FOK (Fill Or Kill) requires immediate and complete execution of a trade; otherwise, a trade is canceled. IOC (Immediate Or Cancel) requires that a part of a trade is executed instantly, and a part that cannot be filled is canceled.

What liquidity providers do brokers use?

Usually, honest brokers have no reason to keep their quotation sources and liquidity providers secret. This information boosts their reputation among traders and makes dispute settlement easier.

It’s important to understand that if a broker prefers to keep their liquidity information private, it doesn’t necessarily mean that you’re dealing with a swindler. Nonetheless, history knows some controversial stories that have to do with liquidity. On October 7, 2016, the thin market saw a sharp fall in GBP/USD. Most Forex brokers provided almost identical quotations, with lows slightly below 1.2000.

Some of you must be wondering why most brokers offer ECN accounts rather than MTF accounts. To get an answer to this question, let’s examine the case of FXCM which used to be America’s biggest Forex broker and liquidity aggregator. On February 6, 2017, the National Futures Association canceled the FXCM’s license. What’s more, the broker had to pay $7 million in fines and was banned from operating in the US territory for life. What caused such harsh sanctions? The thing is, the broker was using the ECN protocol to cheat its clients. In 2009, FXCM started to do business with Effex Capital which was founded by the former FXCM employees.

FXCM was sending the aggregated orders of its clients to Effex Capital. The Effex Capital traders created slippages, causing intentional delays in order execution. The delays were so insignificant that the FXCM clients didn’t suspect anything. Over 4 years, Effex Capital earned about $77 mln in the illegal activities. FXCM got 70% of that amount. With the MTF protocol, such a scam wouldn’t be possible. Of course, it doesn’t mean that all ECN brokers are swindlers but still.

Some of you may find the information about liquidity suppliers and account types excessive. Nonetheless, knowing such things won’t hurt. It’s not uncommon that unrealistic quotations cost traders millions of dollars. This is why it’s important to know where your broker sources liquidity from. Remember that an honest company is guided by the motto “Less is better.” Have you come across questionable quotations that made you doubt your broker’s integrity? Share your experience in the comments! 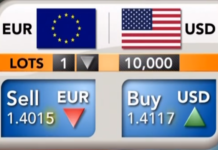 All You Need to Know About a Spot Market

Pipbear.com is a blog website dedicated to financial markets and online trading. Please note that trading, especially margin trading contains high risks of losing a deposit. It is possible to lose all your capital. These products may not be suitable for everyone and you should ensure that you understand the risks involved. To contact the author please use the email address below.
Send me an email: tony@wordpress-491096-1723788.cloudwaysapps.com
©