In this lesson, we continue our study of the price action approach and move straight into the candlestick analysis aspects. Anyone who has already been through the lesson on the trading platform adjustment and conducted at least several transactions (real or demo) on the forex market, should know enough about Japanese candlesticks. I don’t intend to stuff your head with various facts and the names of the patterns’ authors. Let’s discuss how to use the candlestick configuration to improve your trading performance.

When we adjusted the trading platform, I told you that I find it more convenient to use a standard black & white color set in the chart window. I will use the black & white color set in this lesson too but don’t forget that in other sources on candlestick analysis, you may find other colors used. The green & red color set is a very popular one. The bullish candlestick comes in green, while the bearish one comes in red.

What Data Does the Candlestick Display?

Each candlestick contains data, which you call see textually by hovering the mouse pointer over the candlestick. 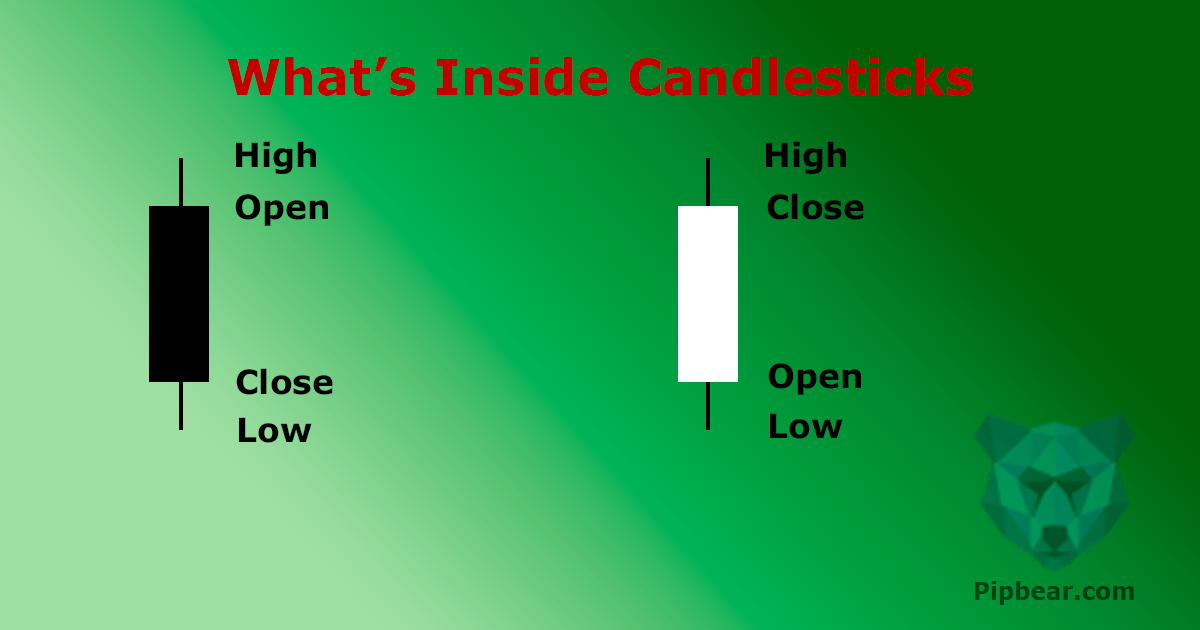 Formations and ratio between the open, close, high and low levels create the candlestick patterns, which is the bedrock of the namesake type of technical analysis.

Each formation has a sophisticated name and traders seem to introduce new names hourly. Therefore, I don’t see the need to learn the names by heart.

You can try to explain each gap in the context of the interaction between the bulls and the bears. However, I recommend that you just make an analysis of the chart in the strategy tester mode and figure out which patterns would bring you a profit.

Gaps and Their Closing

Before we talk about the candlestick formations, we should deal with the term “gap.” 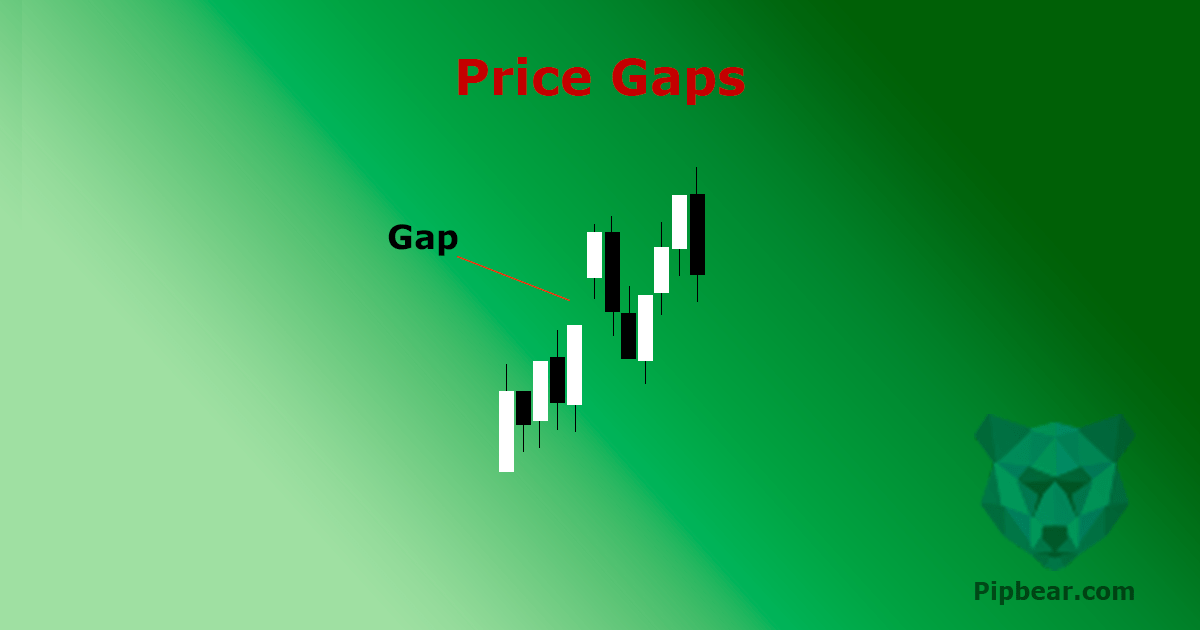 A gap is the difference between the closing quotes of the previous candlestick and opening quotes the new one. Price quotes on the Monday mornings is the easiest example of such gaps. Depending on the events that took place on the weekend when the markets are closed, the Mondays tend to start with an up or down gap. The gap size directly depends on the importance of the events.

The gaps occur all the time. Right now, you can open a one-minute chart and compare the opening and the closing prices over the last couple of hours. I am sure you will find some price gaps within this period.

The closing gap in the context of chart analysis is the strongest signal to open the position.

A closing gap looks like this on the chart: 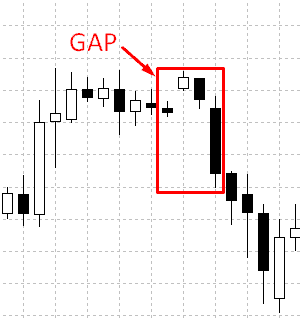 The second candlestick closed on a higher level than the previous one and then the price has made up the gap and closed lower than the close level of the previous hour. This is a strong signal to make open a short position and such candlestick configuration has its name. We will talk about these and other formations later on.

Types of Candlesticks You May See on the Charts

Let’s take a look at several candlestick formations that we most often see while trading. Most data on candlestick analysis is about bullish formations.

The bullish formations are also called the reversal formations. 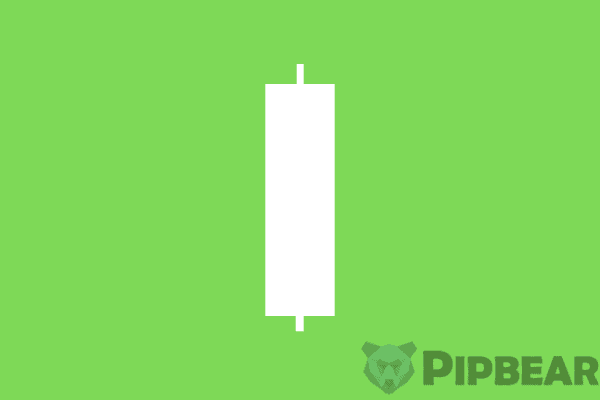 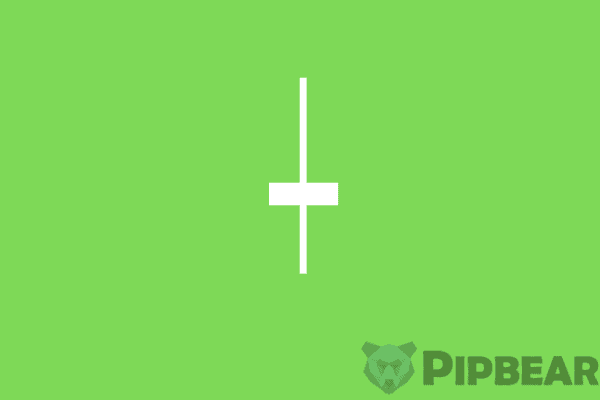 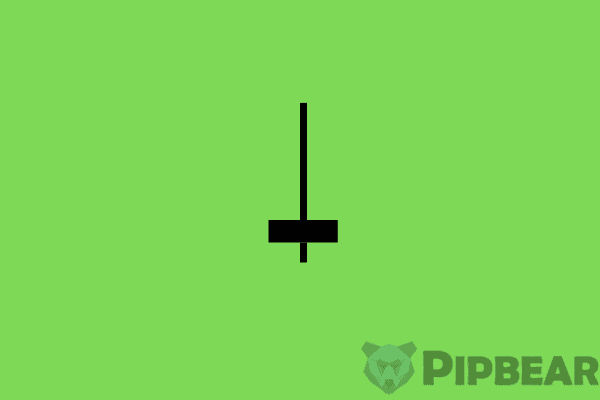 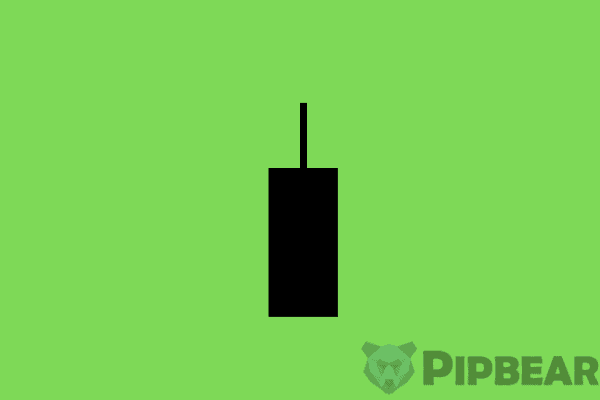 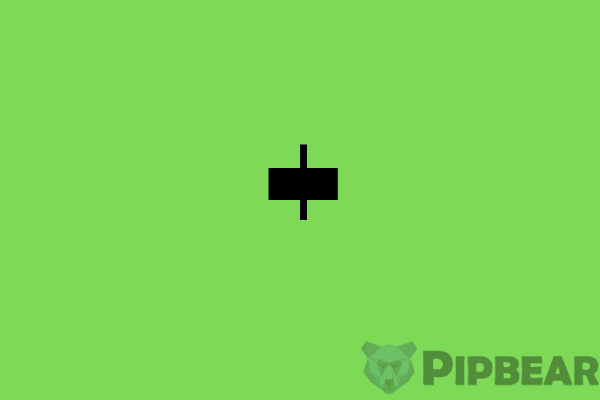 If you see this pattern during normal work hours, you should carefully think about whether it is worthy to work with this trading instrument.

I think you understand that many patterns are described in the classic “Japanese Candlestick Charting Techniques” by Steve Nison. I believe we should pay attention to the five most common patterns you can see on the Forex market and which can be explained in the context of the interaction between the sellers and the buyers. 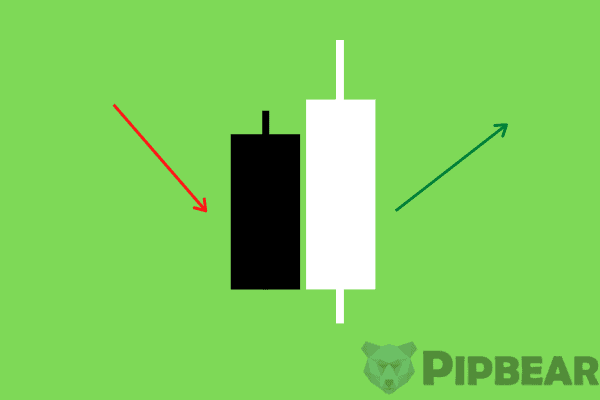 This pattern is a combination of two candlesticks that move in the opposite direction. The white candlestick completely absorbs the black one in case of the Bullish Engulfing. 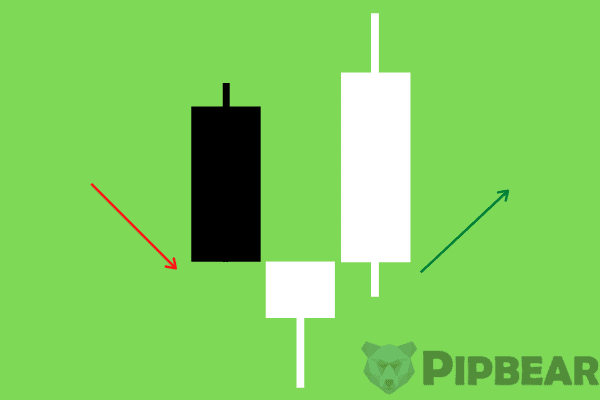 This pattern is based on the long shadow and big body of the candlestick, which we have discussed in the previous section. It is called the Hammer pattern. The bullish formation would mean the white hammer coming after the black candlestick. Usually the stop-loss orders are set below the minimum level (beyond the shadow). 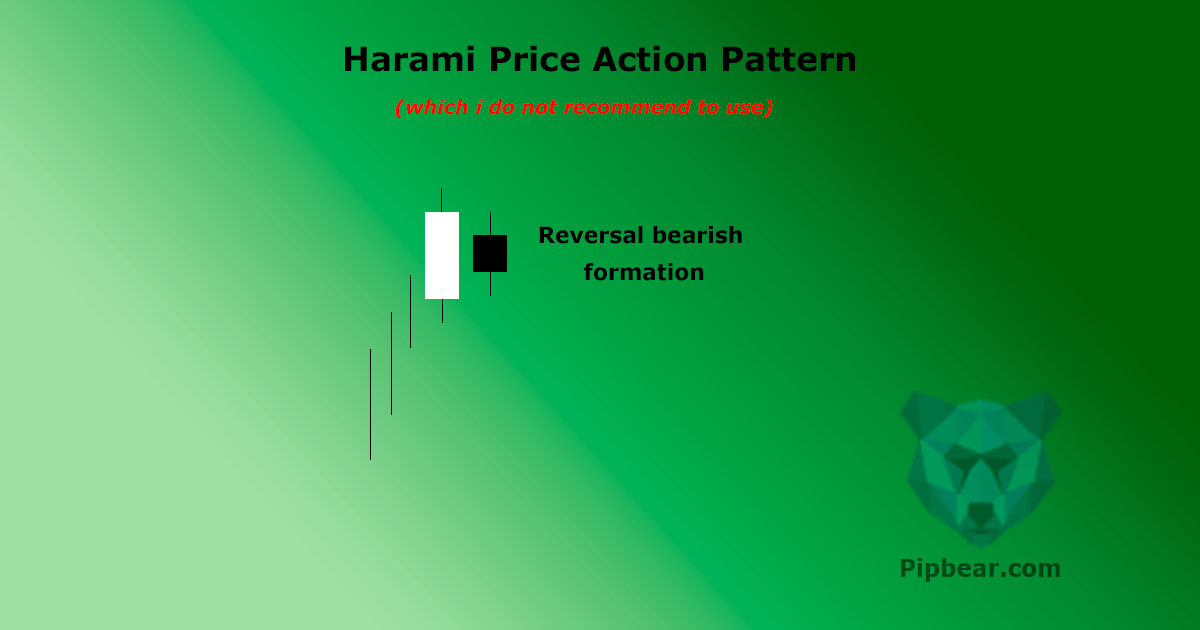 The Harami cross is a version of the pattern with the second candlestick having the same opening and closing prices.

I don’t recommend that you use this model for a couple of reasons.

This model is too widely spread on the market and, I failed to find a clear correlation after performing tests. However, I hope you will still conduct your tests. I cannot explain the sense of the Harami pattern in the context of the interaction between the sellers and the buyers.

Do you think you can? Then leave a comment!

The three white soldiers pattern consists of three white candlesticks with short shadows. You should realize that this formation implies a further rise in price.

The three black crows pattern is the opposite pattern to the previous one. It consists of three black candlesticks with short shadows and implies further price fall. 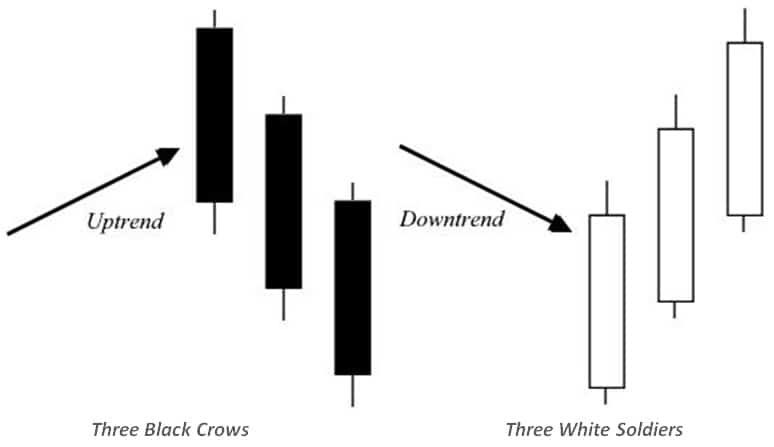 I do not recommend you to use these patterns for three reasons:

Several candlesticks of the same color mean that the trend has already begun and you are trying to jump onto the leaving train.

Any oscillator will tell you that the price has already been overbought (or oversold). In general, this approach is adverse to the “buy low, sell high” concept.

The only exception is when you are trading big timeframes (D1 or bigger) and looking for the smaller entries (h1 or smaller). Then the entry on this pattern would correspond to your risk management strategy. 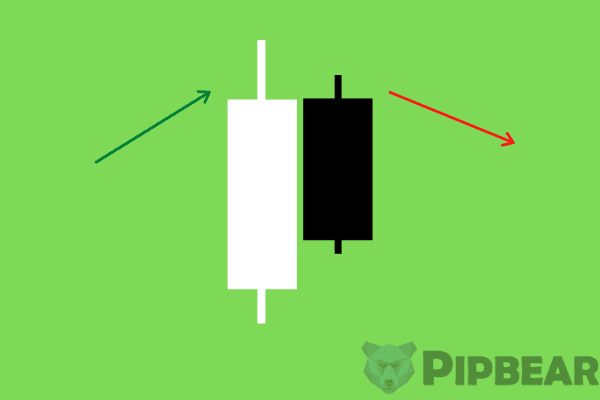 This formation is a particular case of covering. When I was spending a lot of time on candlestick analysis, the traders were determining the covering in percentage terms. Some traders considered 50% of the candlestick’s body size as the covering, the others would need 60%, etc. It means that if the size of the white candlestick is 50% or 60% of the size of the black one, the trend will most likely reverse its movement.

As I have said, these candlesticks represent luck in the market activity. We have determined the reverse of the market because of the gaps. I think it’s a worthy thing for you to remember because these gaps are a good signal even for those who do not focus on the candlestick formations. 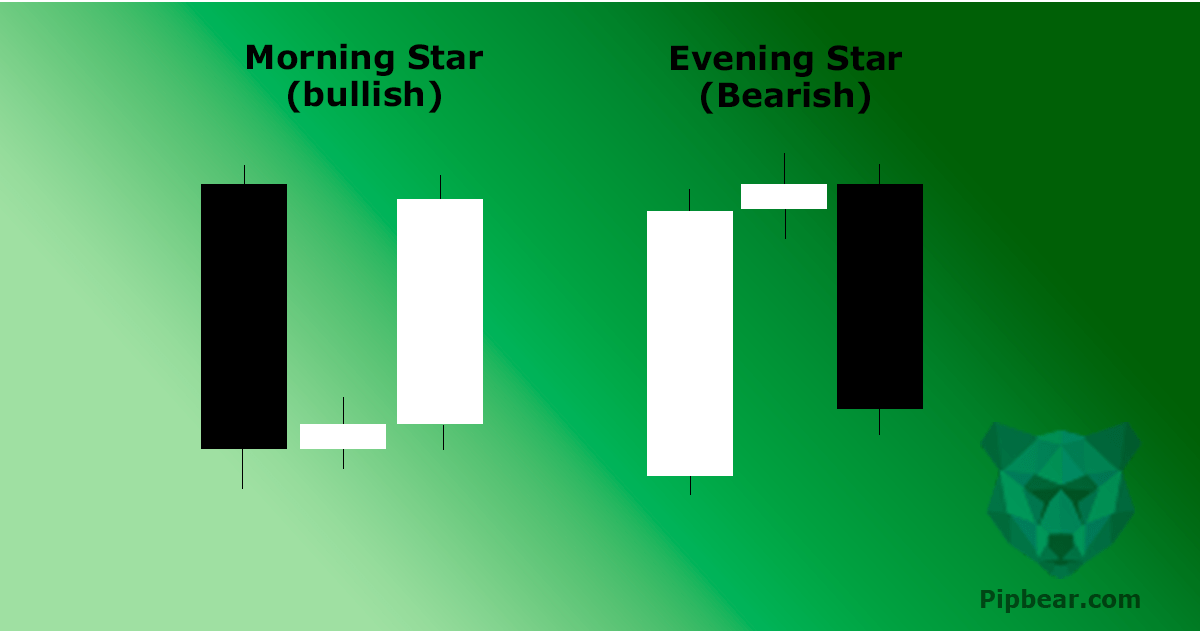 The whole situation just looks great. However, it is completely unclear how to trade in the real market conditions.

Practical Conclusions on the Candlestick Models and My Recommendations

As I have mentioned before, I am quite skeptical about candlestick analysis and I don’t use these patterns in my trading. However, I think we should make three important conclusions which are:

Homework for the Lesson

If you want to strengthen your knowledge, please do a small homework:

Find 10 examples of each of seven patterns on the chart and calculate the amount of trades, in percentage terms, that would bring you a profit.

What is Forex Trading All About?

How to Get into Forex Trading and Not Lose a Fortune?

10 Basic Forex Glossary Terms That You Need to Learn