Triple Top is a reliable pattern that signals the reversal of a bullish trend. In a chart, the pattern is plotted as three consecutive highs of about equal height. Triple Top is a special case of the Head and Shoulders pattern, with the head located at the same level as the shoulders. The differences between the two figures are purely theoretical since both of them indicate a change from an uptrend to a downtrend.

It’s not without a reason that we referred to Triple Top as a reliable pattern. If you think about that, the pattern tells us that a price made three consecutive attempts to break a resistance level and failed every time. Each new attempt confirms that the bulls are losing their grip and enhances the likelihood of a reversal.

Identifying a Triple Top formation can be tricky. There are a few important things (price levels, trading volume, etc.) that need to be taken into account.

Out of all technical patterns, Triple Top is one of the hardest to recognize. As you can see, it requires a trader to do a great deal of analysis. Until the third peak appears, the pattern looks exactly like Double Top. Furthermore, three same-level highs in a row are also characteristic of such figures as the Ascending Triangle and Ascending Rectangle, which indicate trend continuation. Triple Top is only confirmed when an asset falls below the support level, which is accompanied by a leap in the trading volume. 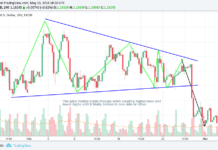 How to Trade Triangle Formation Correctly?

Pipbear.com is a blog website dedicated to financial markets and online trading. Please note that trading, especially margin trading contains high risks of losing a deposit. It is possible to lose all your capital. These products may not be suitable for everyone and you should ensure that you understand the risks involved. To contact the author please use the email address below.
Send me an email: tony@wordpress-491096-1723788.cloudwaysapps.com
©